Janina Čižinauskaitė was an 18-year-old girl who was imprisoned and shot in 1942 in the Ninth Fort, a branch of Kaunas Hard Labour Prison. The letters written to her relatives before her death are not only a testimony of a tragic historical period that is important for Lithuania. Written sometimes in grey pencil and sometimes in fading black ink on cheap and yellowish paper, they reflect simple but very authentic truths that shock the reader to the depths of the soul, purified with anxious anticipation of the outcome of the case, and at the same time with the sober realisation that all hopes of saving life, returning to freedom, meeting with her parents, sisters and friends may very soon and mercilessly be dashed to pieces. After all, quite a few prisoners of the same cell, marked with the ill-fated number 13, had already been taken away for execution a few months or weeks earlier…

The tragic fate of Čižinauskaitė, which has been brought into the public, generalises and gives meaning to many other lives that terminated under similar circumstances; these are the lives that were only starting and the lives that are now little known or forgotten. That is why her letters were recommended for inclusion in the UNESCO Memory of the World Programme.

Similar personal notes of young people murdered during the Nazi occupation, which have already been published, exist in almost all European countries. First of all, they are the legacy of the Holocaust victims. Unfortunately, many diaries and letters written on the eve and at the beginning of WWII have been lost forever along with their authors.

The diary of Anne Frank, a teenage girl who was executed in a Nazi concentration camp, is perhaps the most widely known in the world, and has been published in quite large print-runs in various languages. After fleeing Nazi-ruled Germany with her family because of anti-Semitism, Anne was hiding in the Netherlands during almost all the war. It seemed that she needed only a bit more success to be able see its end. Sadly, this did not happen… The only consolation is that Anna’s experiences can now be read and reflected upon by her peers today.

Some notes of the somewhat similar nature of girls who perished in the Holocaust with their loved ones have also appeared in Lithuania over time. The most famous author is Matilda Olkinaitė. Some people still remember Estera Kverelytė, although very little information about her has survived. The mood and content of both diaries are comparatively similar to the letters of J. Čižinauskaitė. In her notes, Estera, and Matilda in particular, not only vividly conveyed the atmosphere of eerie and oppressive uncertainty, but also brightened it with flashes of hopeful and youthful optimism as well as provided surprising, unexpectedly mature existential reflections. Similarly to Čižinauskaitė’s letters, the diaries resonate with love for their loved ones, an endless desire to live and horror at the war, which brought out the darkest side of human nature. The common leitmotifs here are understandable: all three girls were of a similar age and, when the Nazi occupation began, found themselves in a very dangerous position of being persecuted. Nevertheless, they are quite different and authentic personalities with their own character, individuality and perception of the social context. Finally, they did not know each other as they had never met.

Matilda and Estera were born into relatively wealthy Jewish families in provincial Lithuanian towns. Therefore, they had more free time and opportunities for education. Janina was a Lithuanian girl from Kaunas, from proletarian background. She and her two younger sisters grew up in a rather poor environment, which had considerable contrasts in wealth. As a result, when she was a teenager, she became fascinated by the slogans of social justice proclaimed by the Communist Party, and began to read the works of the Russian revolutionary writers Maxim Gorky and Mikhail Sholokhov. This only strengthened the girl’s faith in the Soviet system. From a young age, Čižinauskaitė was characterised by her energy and her desire for challenges and activities. In high school, she liked playing sports and did athletics; later, she enrolled in a gliding course. She dreamt of becoming a pilot. There were in fact no women in Lithuanian aviation at the time.

Čižinauskaitė was enthusiastic about Lithuania’s occupation by the Soviet Union in the summer of 1940. She had no doubts about communist ideas, because at that time she probably did not yet have a clear idea of how they were being put into practice and how many innocent lives were being sacrificed. She immediately joined the Lenin Komsomol and soon became the head of ideological education of a younger pupils’ group called pioneers. The members of this organisation used to wear bright red ties as a distinguishing mark. The young pioneer leader liked her work very much and spared no time in organising meetings, excursions and competitions.

On 22 June 1941, when the war between Adolf Hitler and Joseph Stalin started, Čižinauskaitė was in the resort of Palanga, in a pioneer summer camp. This narrow western part of Lithuania, bordering the Baltic Sea, was quickly occupied by the German army. The Gestapo who came from Tilsit immediately started killing the local Jews. The first victims of the Holocaust in Lithuania were the inhabitants of Gargždai. Shortly afterwards, the same fate befell the Jews of other towns in Kretinga County. However, not only the Nazis, but also the retreating Red Army, together with the local communist activists who assisted it, also were spreading death: they tortured and shot the arrested people, often without any serious reason: these were just random people who aroused suspicion. The appalling Soviet terror and the mass deportations that had just ended created a very favourable environment for Nazi anti-Semitic propaganda in Lithuania. As a result, some society members became involved in the massacre of the Jews, while others did not actively oppose it: they were trying to ignore the cruel reality and preferred staying aside.

At the very beginning of the war, Čižinauskaitė did not suffer from the Nazis. As a pioneer leader, she was kept under police surveillance for two weeks and then received a permission to return to her parents from Palanga to Kaunas. This first time, she received “amnesty” mainly because of her almost childlike age and insignificant duties. Meanwhile, the other girls that have been mentioned, Matilda Olkinaitė and Estera Kverelytė, as well as their relatives, were soon brutally murdered. There is no evidence that they collaborated in any way with the Soviet authorities: they were murdered simply because of their nationality and because they were outside the ‘racial law.’ This is the fundamental and most dramatic difference between the situation of Lithuanians and Jews during the Nazi occupation. The former, even as Communist sympathisers, could hope for mercy in certain circumstances, while the latter were condemned to destruction without any reservations.

After arriving in Kaunas, Čižinauskaitė took a job in a kindergarten in Vilijampolė and established contacts with the newly emerging communist underground. Its operation was very difficult in the second half of 1941: the Nazi secret police, the Gestapo, had a large number of agents, and they were effectively disrupting the resistance groups. At the beginning of 1942, Čižinauskaitė understood that she was being followed. She tried to escape from Kaunas and hide in a remote town in Panevėžys county, but in February the police arrested her there anyway and brought back to Kaunas. She was interrogated intensively and cruelly for several months in the Gestapo basement and then transferred to the branch of Kaunas Hard Labour prison in the Ninth Fort. There, Čižinauskaitė was living until autumn and wrote her famous letters. On 17 October, without being informed of the death sentence and without any formal ceremony, the 18-year-old girl was shot in the fort’s moat, along with approximately a hundred other prisoners.

Čižinauskaitė’s role in the pro-Soviet Kaunas underground was not significant in 1941. This is reflected in her correspondingly modest place in the Soviet propaganda “martyrology”. Although her fate was no less tragic than that of the most famous Soviet subversive of Lithuanian origin, Marytė Melnikaitė, whose sculpture was erected on a huge pedestal in Zarasai after the war, she did not receive any similar fame and public adulation. She did not become a celebrity or a symbol; she did not become “famous” through works of literature, school textbooks or films. It was not until 1958 that Čižinauskaite and a dozen other Kaunas Komsomol members (most of them posthumously) received an official Soviet award for their achievements during the war. This rather late award was probably due not so much to the moral debt of the living and the desire to repay them for their loyalty to the Communist Party, but to the need to widen the circle of heroes who came from the “bourgeois provisional capital” and fought against “local fascists and Hitlerites” there. The year 1958 marked the fortieth anniversary of the first attempt to proclaim “Soviet rule” in Lithuania, and the party leadership had decided to establish a “museum of the revolution history” in the Ninth Fort in Kaunas. In this case, the more plots, heroic characters and related “relics,” the better.

Despite the thick ideological shell formed during the Soviet period, Čižinauskaitė’s letters have not lost their value from a human point of view. They testify to the girl’s idealism, her unquenchable hope and the spiritual bond with her family that she maintained under the most difficult circumstances. As life experience accumulates and enriches, the worldview of many people changes quite obviously: youthful maximalism dissipates, and one begins to look at past events and phenomena more deeply and from different angles, not losing sight of both pleasant and unpleasant nuances. Therefore, we do not know what our heroine’s letters would have been like if she had written them when she was very old. We do not know how she would have felt about her youth, which, unfortunately, was forever frozen in time at the age of just eighteen as well as the many millions of other victims of WWII who had experienced a pitifully short earthly life. 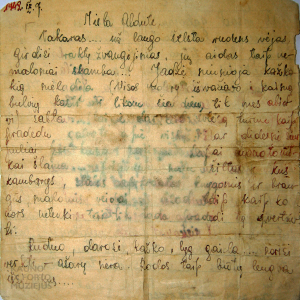 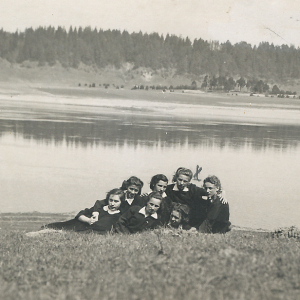 Janina Čižinauskaitė with her friends near the Nemunas River (hugging her friends by the shoulders, marked with a cross in the photo). Kaunas area, the end of the 1940s 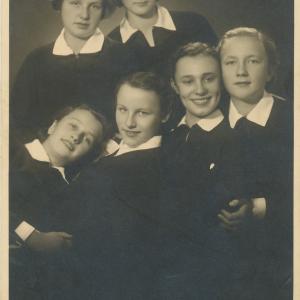 Janina Čižinauskaitė with her friends (second row, first from the left). Kaunas, the end of the 1940s

Modestas Kuodys. HE WROTE MUCH, EVEN A REPORT ABOUT THE PLACE WHERE FATE PREDESTINED HIM TO MEET THE ETERNITY. JOURNALIST JUOZAS KAZYS BELECKAS (1905-1942)