Exhibition of paintings by Virginijus Kašinskas

Virginijus Kašinskas was born in 1955, in Šilalė, Samogitia. He studied painting in Vilnius Art Institute (Vilnius Academy of Arts). The works of the artist have been exhibited in Lithuania since 1987. He participates in both group and personal art, painting and photography exhibitions and is a participant of republican and international exhibitions. V. Kašinskas teaches drawing and painting, he is interested in ethno culture, mythology and pays specific attention to the research of necrotic culture. These interests are closely related to the subject matter of the author’s creativity. Traditions, rituals, symbols and the spiritual experience is reflected in the author’s composition, motives and painting style.

One of the most significant personal exhibitions of V. Kašinskas is the cycle of 40 paintings “Laments” that represent the topic of death. A part of this cycle is exhibited in Kaunas IX Fort Museum. According to the artist, necrocult is one of the most important old traditions in Lithuania.

It is in the tradition of honouring the dead that there are unique mythological features, through which the pure principle of our nation’s worldview is revealed. Funerals in Lithuania are marked by many rituals, such as nursing-mortifying, shroud, laying out a corpse, flower wreaths, reception. It is believed that this way the journey of the dead is facilitated and the living ones are protected from the contact with the land of the dead. Laments – is a significant part of the burial ceremony. By crying in front of everyone, people express their love, pain and sorrow for the dead one.

The study of the decease cult traditions and native Samogitia inspired the creation of V. Kašinskas “Laments” cycle. The paintings are dominated by the abstract spaces and generalized figures, age, nationality, race, gender and place lose their importance because the focus is on the general emotion – grief. Pain covers everything, without boundaries. The works are characterized by linear drawing, changing, multi-directional movement which is connected by rhythmic shapes. Unquiet, appearing and disappearing figures create an impression of absolute subordination to the spiritual layer. Dark and red colours that are inherent to the Samogitia region dominate in the paintings. In this case, they symbolise suffering and pain.

“Laments” cycle was created in 1988-1997 in the spirit of national revival, during the formation of “Sąjūdis“ and independent Lithuania. It was the period when the crimes committed by the Soviet Union: terror, the suppression of the resistance movement, deportations and their scale were expressed publicly. The paintings emphasize the spiritual and physical pain and losses of the Lithuanian population experienced during the years of occupation without portraying any specific historical event. This also reminds the bloody but hopeful way of Lithuanian nation to the resurrection. 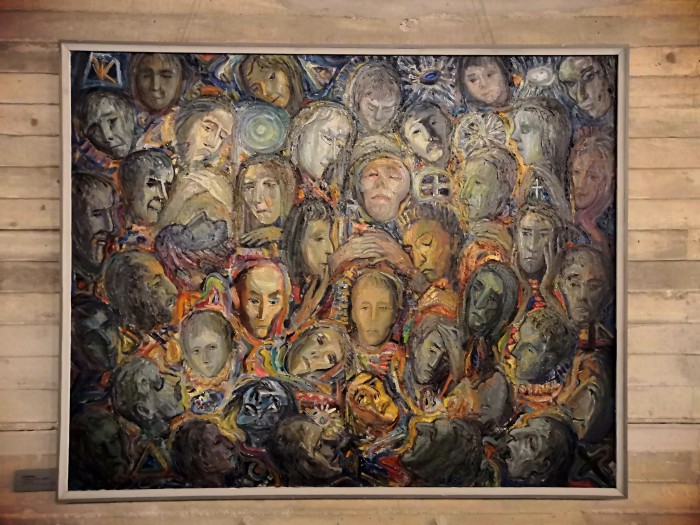