The release of a collection of articles

“The Holocaust in the Eastern and Western European States Occupied by the Nazis: Studies and Memory“ 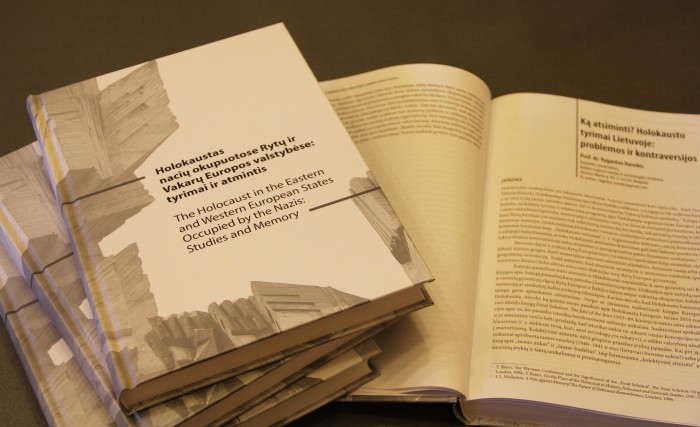 The Holocaust is a massive destruction of the Jewish nation during the Second World War. It is one of the most painful periods in the history of humankind, which symbols, meaning, and religious significance have not lost their relevance after more than 70 years. Lithuanian and foreign historians, state actors, and public figures raise issues related to the Holocaust, which rise a resonant response in the society. It only proves once again that there is a lack of a deeper public education and facts based on compelling information on this extraordinary topic.

Taking into account the processes mentioned earlier, in cooperation with the Kaunas IX Fort Museum, the International Commission for the Evaluation of the Crimes of the Nazi and Soviet Occupation Regimes in Lithuania and the Jewish Community of Kaunas, in 2017, a collection of scientific articles “The Holocaust in the Eastern and Western European States Occupied by the Nazis: Studies and Memory” was published in Lithuanian and English languages. It was based on the questions discussed during the international scientific conference “Local Analysis of the Development of the Holocaust in the Eastern and Western European Countries Occupied by the Nazis”, held in Kaunas in 2016 October 27-29. The publication consists of the works from thirteen authors, among who are universally recognized scholars and researchers from Estonia, Israel, the United States, Latvia, Lithuania, Poland, Ukraine and Germany. A collection of scientific articles covers a wide range of problematic research fields that are relevant not only to the academic community but also to the general public: senior pupils, students, as well as those who are interested in the history and historical memory of the Second World War, Jewish nation and the Holocaust.

We want to thank everyone who contributed to this publication and we kindly invite you to participate in the presentations where you can meet the authors and publishers.